In the Service of our Ancestors and African Love,
Listen Seeker, I come in Peace,

“The only protection against INJUSTICE in man is POWER—Physical, financial and scientific.” — Marcus Garvey

Chess informs us of two fundamental truths: white aggresses and when manhood falls a Race is defeated.  If you are an African Man you must imbibe these truths.  You will be aggressed upon and if you are not careful you will doom your Race.  In all of life’s endeavors, the better organized, technologized and strategized are victorious.  As a Baba, it’s possible that one day my Son will ask, “Baba, when did the invasion of Africa end?”  It’s up to us men whether I can give him a solid date.  As it stands, I can only say, “The invasion hasn’t ended.  The invaders still rule.” 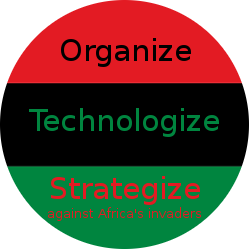 “Organize, Technologize and Strategize against Africa’s Invaders”: The Motto of a Self-Determined African Race
by Baba Onitaset Kumat

For all of life’s endeavors the better organized, technologized and strategized are victorious. For most of human history, the victors were African. This changed six-thousand years ago, and until the focus of Africans is organization, technology and strategy, this change may be indefinite. It’s a little known fact that non-Africans share one goal: to militarize better than Africans. As Africans, our ancestors have built many wonders of the world. In fact, the largest pre-modern man-made work is deep in Africa’s west (Eredo). Yet as marvelous as that is, the description gives away the flaw of our condition. non-Africans are in a post-modern age while we Africans are not even comparable to our pre-modern age. If, for instance, the Songhay Empire of days passed sought to war with the modern Africans of the Diaspora or the Continent, that Empire equipped with spears, shields and horses would be victorious; yet, for non-Africans, not the best of their past can fare against the worst of their present. non-Africans have said “I can Militarize Better than Africans” and until we deny them that reality, our reality will be pitiable.

non-Africans have lived by one principle, “Might Makes Right.” All of their history is explained in that one principle. Why, for instance, did france and england gain the lion’s share of colonies in Africa? Why did the u.s.s.r. back away from sending missiles to cuba? Why are none of the u.n.’s permanent members of their security council African? Why did america reunite following its civil war? Why did germany murder its own population for over a decade? Why does america murder its own population? In all of their history “Might Makes Right” remains the only truth. Some may attempt to fool us with other notions. They will say people voted, or businesses financed, or this person said or did, but most of those other notions are false, complicated or contradictory. We as a people should keep it simple, non-Africans live by “Might Makes Right.”

Only when we establish this, do we understand where we as a people must be and where we as a Conscious people must lead. As it stands today, many of our people are misleading our people. Many of us advocate solutions which do not add to our Might (Power). We have many brilliant Brothers and Sisters advocating “Knowledge of Self” stripped of might, or education and spiritual systems, stripped of might; and while these ideas look good–as who doesn’t want to understand ‘Odu Ifa’ or ‘The Book of Coming Forth by Day” and who doesn’t want their child to learn in a school by Africans for Africans–reality is, when these are promoted without might (which they usually are), the benefits are minimal; as without Might, our people will be Ruled and our conscious will be Fooled.

Let’s be clear, non-Africans play chess against us. It’s a war game where they aggress (white goes first) and they use their institutions (rooks), religions (bishop), armies (knights), masses (pawns) and women to corner and immobilize our men and they’ll destroy everything we hold dear to get to our men. It’s a game that doesn’t end until their men are cornered and immobilized and if that takes destroying all they hold dear, so be it–that’s how to be victorious. So you need Might. You need Power. It’s Chess. Plain and simple.

The great irony of it all is that Might is not only easily acquirable for a determined people, but if Africans were truly self-determined, we could easily become the Mightiest people once again. The principles of Might (or Power) are Organization, Technology and Strategy. In the animal Kingdom, humanity possesses the ability to be the supreme organizers, wield the greatest technologies and devise the best strategies; but when it comes to so-called humans, the African holds the highest position in regard to capacity. So though non-Africans have not reached their organizational, technological or strategic limits, their limits are lower than Africans’. Therefore, self-determined, we would once again be the supreme Race. It’s only a matter of us conceding to this pursuit.

So while the non-African will say “Might Makes Right” and limit his determination to Militarizing himself, the truth remains that his path is exclusively destructive and his might is passable. america, a mighty non-African state, has an armed force that is roughly 2 million strong (counting reserves) or 0.6% of its population. china, currently the possessor of the largest armed forces, is roughly 2 million strong as well or 0.18% of its population. Yet with their 2 million each, they and others rule over a global African population of over a billion. Not only will organization, technology and strategy, make a population of over a billion defeat militaries of two-million, but organization, technology and strategy will also make our constructive path that much more livable for us. The benefits of organization, technology and strategy are endless.

3 thoughts on ““Organize, Technologize and Strategize against Africa’s Invaders”: The Motto of a Self-Determined African Race”

Please ask any questions that come to mind Cancel reply